Kimberly Seals Aller's post about Medolac's program to purchase milk from black mothers in places like Detroit and my blog post on their stockpile of a million ounces of human milk have both received a tonne of attention. Questions abound, like "what are they doing with all that milk" and "why do they want milk from the black mothers of Detroit?"

Here's one thing Medolac says they're going to do with all that milk...

From Medolac's own website, a news release sent out six weeks ago announcing they will soon be offering "large scale purification of Human Milk Oligosaccharides (HMOs)" 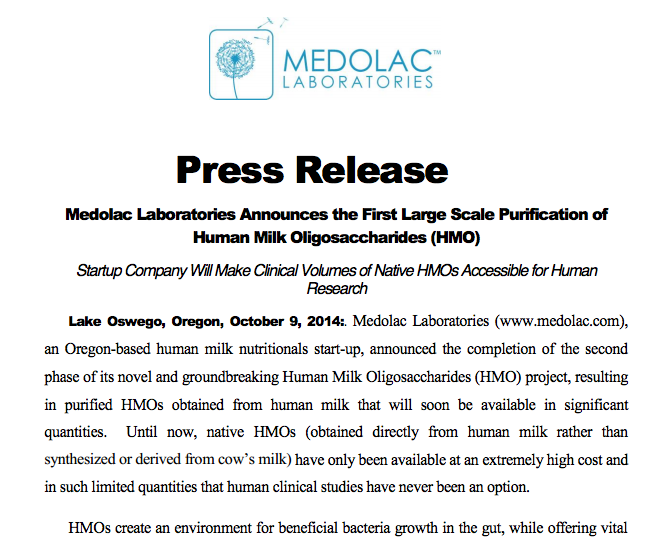 Medolac will soon have "a radical increase in the volume of purified HMOs available for clinical research." Until now "native" human milk oligosaccharides have only been available "at an extremely high cost and in such limited quantities that human clinical studies have never been an option," says the firm. Owner Elena Medo: "thanks to our partnership with the Mothers Milk Cooperative (MMC) we have greatly increased the supply of donor milk to make this possible."

Medo calls this a "first foray into this exciting area of native human milk components including lipids, proteins, oligosaccharides and active biologics."

Who knows what is coming next, but since we're exploring the use of components of breastmilk for research, I should mention that at least one breast milk researcher has suggested a reason to target black mothers would be to access biomarkers specific to black women that may give clues to their higher rate of breast cancer.  Which might sound like it is good thing if it cures cancer in black women, but the notion that we would harvesting black mother's milk to sell their genetic material to researchers who stand to gain enormous profit from resulting treatments is incredibly exploitive. 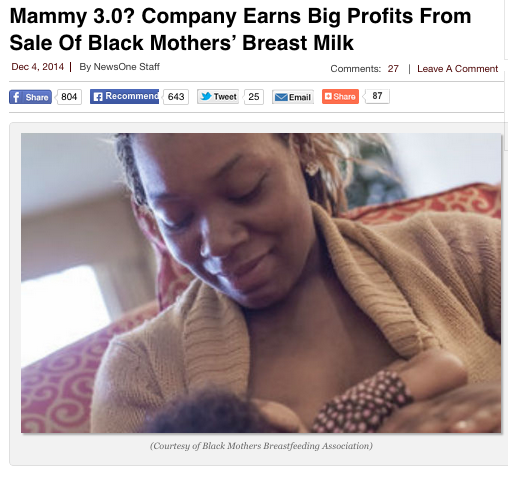 And it's not that far-fetched. We've already seen breast pump company Medela team up with researchers to extract stem cells from breastmilk, trumpeting it as "a solution to the ethical dilemma of using human embryonic stem cells." My thoughts turned to Margaret Atwood when I heard of the stem cell research and I contemplated 20-something women's milk being harvested not for their own babies, but to treat Baby Boomer's preventable lifestyle illnesses like heart disease and diabetes – a futuristic Handmaid's Tale. The suggestion that Medolac would buy milk from black women in Detroit drew historic comparisons from the egregiously exploitive days when black slave women were forced to wetnurse their master's white babies – one headline writer has labelled the scheme "Mammy 3.0"

Who knows how how much of this HMO product might be available for sale or what the price will be? I'll bet the margins are pretty darn good. Better if the oligosaccharides are coming from milk that isn't otherwise able to be used. MMC is known to reject some of it's mothers' milk due to high bacterial counts, but says it is too expensive to ship it back to the mothers who sent it in. What happens to that milk? Do they pour it down the drain? Or...

Stay tuned for part two, Medolac could be making lucrative, human-milk-derived fortifer from its 1 million ounce stockpile.
Posted by Jodine Chase at 8:18 PM