A working group has been formed to reopen the donor human milk bank at IWK Health Centre in Halifax. Dalhousie University nursing professor Kathryn Hayward says it could be in place in three-four years. Meanwhile there's an active HM4HB milksharing network for families in need.

Sharing the milk of human kindness - Nova Scotia - CBC News
A group of women who share breast milk are hoping to see a more official arrangement at the children's hospital in Halifax.
... 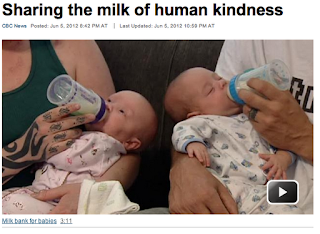 Posted by Jodine Chase at 8:55 AM No comments:

Breastfeeding goals sabotaged before moms even leave the hospital

A new study done by the Centre for Disease Control (CDC) in Atlanta and published in Pediatrics this morning is getting a huge amount of attention in mainstream media and in the social media world. (See here for google news links to coverage by HuffPo, ABC News, WebMD, and more.)

Sixty per cent of moms said they wanted to breastfed exclusive and over 80 per cent of those moms said they wanted to breastfeed exclusively for at least 3 months - yet forty per cent those moms were unable to meet their goal.* This speaks volumes about the need for support for these families, and support begins right in the hospital at birth. Supplementing only when medically necessary, and supplementing with donor human milk, are important components of WHO/UNICEF's Baby Friendly Hospital Initiative. The BFHI involves following these 10 steps and practicing in accordance with the International Code of Marketing Breastmilk Substitutes.

In Canada, the largest hospital to be certified Baby Friendly is B.C. Women's. This hospital houses the B.C. Women's Milk Bank, and when babies need to be supplemented they don't reach for infant formula. Donor human milk is the "house" milk. This is the model that should be in place in all hospitals. Supplementing only when medically necessary will drastically reduce the rate of babies receiving anything other than mother's own milk, and those who still need to be supplemented can receive donor human milk. Many of these mothers, if supported to reach their goals, will have more than enough milk for their own babies. These are the mothers who will go on to become donors.

We need to move fast in Canada to implement our BFI initiatives so ALL MOTHERS who set a goal to breastfeed exclusively are supported, instead of being sabotaged before they even leave the hospital!

Below is one of the many news articles today on this subject:


Most Moms Hope to Breastfeed Exclusively First Three Months, One-Third Do - ABC News: Most Moms Hope to Breastfeed for Three Months, Only One-Third Do
By MIKAELA CONLEY (@mikaelaconley)
June 4, 2012
When Tamara Clarke gave birth to her son in April, she had every intention of exclusively breastfeeding him until he was at least three months old.
But her plans got sidelined when she said hospital staff encouraged Clarke to give her 8-lb son formula after he lost 9 percent of his body within the first three days. She gave in, but soon after, the baby experienced "nipple confusion," and she could not get him to latch while breastfeeding. After he was exclusively fed formula his final day in the hospital, Clarke said she had to pump then feed her son through a bottle when they returned home.
"Around four weeks of age, he started latching on again and now he feeds from the breast like a pro," said Clarke of Marietta, Ga. "It was an uphill battle getting back there. I still pump and bottle feed him breast milk as well as supplement with formula at night. Although, he's getting my breast milk now, I still look back on that experience and feel duped."...
"We now have the evidence to prove that giving anything other than the breast to a newborn is the key factor in the success of the breastfeeding relationship," said Emma Kwasnica, a Vancouver-based childbirth and breastfeeding educator. "Even more appalling is the fact this disruption happens during the very first two days of life. When 80 percent of hospitals in the USA are supplementing the newborn baby by Day 1 or 2, the mother-baby unit doesn't even stand a chance."...
But the breastfeeding relationship has already been jeopardized when supplements are given in the hospital. Nevertheless, women who experience problems need more than just baby-friendly hospitals," said Susan Burger, president of the New York Lactation Consultant Association."They need customized follow-up care to assist them to overcome their own specific problems to augment the general advice they may receive in the few short days they are in the hospital," Burger said.