This is a must read blog post by IBCLC Diana Casser-Uhl, who blows the whistle on who appears to be behind a new effort to use the media to create fear and loathing over the use of pharmaceuticals to address problem when something goes wrong with human milk production. Apparently it's ok to take drugs to fix thyroid problems or erectile dysfunction, but if mothers take drugs to fix low milk production, it becomes "dangerous ... extreme measures." 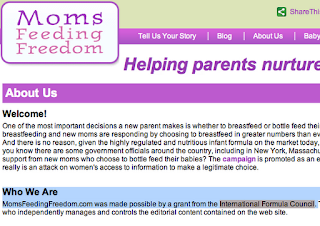 Diana draws attention to a connection between a recent mommy blog post and the International Formula Council. This formula company industry association representing Abbot, Mead Johnson, Nestle, Perrigo and Pfizer is the funder behind what, on the surface, appears to be typical mommy blog.


"Here's an alarming fact: The pressure to breastfeed had gotten so out of hand that new moms are now taking pills prescribed for GI problems to increase their milk production! "

Who benefits when the practice of taking a drug that boosts prolactin levels, which in turn boosts milk production, is "dangerous," or "extreme breastfeeding?" Yes, you've got it! Formula companies sell more product when moms can't make milk for their babies.

It seems to me that mainstream media outlets and their cousins on the Internet are more interested in boosting their numbers to make advertisers happy than they are in anything resembling investigative journalism. The television producer chasing this story didn't even notice the foul smell.

We need to ask ourselves whenever we see negative publicity about breastfeeding - who stands to gain when human beings don't produce human milk for their human babies?

Check out Diana's blog post - it's well worth the read.


When the media spins the biological norm

I am often asked, through networks of professionals, to connect a reporter or media representative to breastfeeding mothers in a particular situation. There are some requests that I scramble to satisfy, without reservation, because either the journalist is one whose work I am familiar with (and is truly supportive of breastfeeding), or because the population they are looking for is one that can benefit from exposure. I’m all for raising awareness and bringing less-known breastfeeding topics into the cultural mainstream. more

Posted by Jodine Chase at 9:44 PM No comments:

Donor human milk banking is intensified in this country as part of its long battle to boost breastfeeding rates.


IRIN Asia | PHILIPPINES: Banking breast milk to save lives
Photo: Jason Gutierrez/IRIN
A mother breastfeeds one of her twin babies at Jose Fabella Medical Hospital
MANILA, 13 August 2012 (IRIN) - The Philippine government's state-run breast milk bank is intensifying collection efforts to boost breastfeeding among the poor and help women return to work immediately after giving birth if they want to do so.

Hundreds of women come to have their babies at the Jose Fabella Memorial Hospital, the busiest maternity institution in Manila, the capital, where more than 12 million people live. Many women are barely able to afford even the minimal payment, and to help cover their costs some of them donate breast milk to the hospital’s milk bank, which is used to feed babies whose mothers have lactation problems.

Esmeraldo Ilem, head of the hospital's family planning unit, said the milk is also sold at up to US$10 for four litres to other hospitals and individuals, with mothers as a first priority. “Even hospitals in far-flung areas or provinces come here to buy milk from us," Ilem told IRIN. "[For instance,] when a mother dies in a hospital [where there is no milk bank, the family] comes here to source the milk."... more

Posted by Jodine Chase at 3:02 PM No comments: