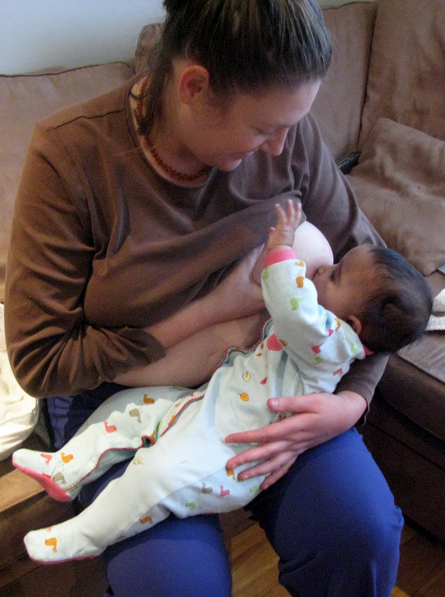 The Montreal Gazette has an excellent article exploring the new Hema-Quebec milk bank as one more option for families who can already access human milk through milksharing networks. The milk bank will provide milk for premature infants born before 33 weeks gestation. Goldfarb clinic's Carole Dobrich is quoted noting the lack of support and guidelines for milksharing from Health Canada. Mika Puterman of Montreal Milkshare and Emma Kwasnica, who founded HM4HB while living in Montreal, are also quoted. Kwasnica also discusses cross-nursing, which she says is still taboo:


“It seems somehow the idea of expressing your milk, putting it in the freezer, and giving it to another woman — that’s okay. We can talk about and show that, take pictures of that,” she said. “But nursing another woman’s baby ... it’s an intimate act that you feel like you’re sharing with someone else. And it’s a lot more personal than just expressing your milk and handing a frozen cartridge of it off to another family.”

BY JOANNE PENHALE, SPECIAL TO THE GAZETTE JUNE 6, 2014

Valérie Laramée, whose surgery left her unable to produce enough milk but nonetheless wants it for her baby, found a network of donor mothers online.
Photograph by: Marie-France Coallier , The Gazette
MONTREAL — The benefits of breastfeeding are trumpeted far and wide these days, after falling out of favour in Quebec and elsewhere mid-20th century. For mothers who want breast milk for their babies but can’t provide enough themselves, options for obtaining it are increasing.
With Héma-Québec’s recent opening of the province’s first milk bank in decades, premature babies in Quebec who have a doctor’s prescription now have access to pasteurized human milk. ... link to full story

Posted by Jodine Chase at 1:19 PM No comments: