Canada now has 4 donor human milk banks, yet preemies in NICUS are still going without

Canada now has 4 donor human milk banks, yet preemies in NICUS are still going without

Help raise awareness, money, and milk for premature babies in our NICUs It's every pregnant woman's worst nightmare - rushing to hospital in labour with a due date far in the future, giving birth early to a tiny and fragile premature baby, and watching that baby begin its fight to survive. One in 12 Canadian births is premature, and the sickest and most fragile of those babies are hospitalized for weeks and months in neonatal intensive care units. And some don't go home. Prematurity is the leading cause of neonatal death (after congenital malformations.)

Yet, more preemies are surviving now in Canada because they're less likely to suffer from a painful and debilitating disease called necrotizing enterocolitis (NEC). Babies who are fed exclusive diets of human milk - from mom, from donors, or from both - have a much lower risk of contracting NEC. There are hundreds of cases of NEC annually in Canada and it kills dozens of preemies each year. Ontario has 15 NEC deaths a year. A single case can cost well over $100,000 to treat. (See Best for Babe's Fast Facts: Miracle Milk for more info.)

Yet, up until 2012, there was only one single donor human milk bank in Canada, in Vancouver, and it did not begin serving premature babies in the NICU until 2009. After our network of milk banks closed almost overnight in the midst of the AIDS crisis in the 80s, new infant formulas tailored specifically for premature babies filled in the gap. Many women have difficulty establishing their milk supplies after a premature birth, and without ready access to donor milk, it became a rare thing in the NICU for a baby to receive only mother's milk. But over the years we learned an exclusive human milk diet was an important component in avoiding NEC illnesses and deaths. In 2010 the Canadian Pediatric Society issued a formal call for a network of donor milk banks across the country.

The result? Almost as fast as Calgary's milk bank closed in the mid-80s, a team of experts and volunteers led by Jannette Festival mobilized money and milk donors and Calgary's milk bank opened in 2012. In March, Toronto's milk bank celebrated one year of operation after years of delay (see Human Milk News: Toronto's sparks controversies over delays leading to baby deaths) and Montreal's milk bank is opening officially later this May. There is an active effort to open a milk bank in Saskatchewan, and in Halifax babies in NICUs are now receiving donor human milk from other areas as plans move forward for a local milk bank to serve the region.

This is great news for some of Canada's premature babies and their families. But more needs to be done. Fewer than half of the country's NICUs have access to donor human milk today. After decades without public awareness, and with donor milk mainly used in the NICU, away from regular maternity wards, most moms giving birth to healthy newborns have no idea that donor human milk banks are even a thing! Very few hospitals in Canada offer donor milk for healthy babies when mom's own milk isn't quite enough. New moms are surrounded by infant formula marketing materials but there are rarely pamphlets or posters explaining the need for donor milk in hospitals, public health clinics or pediatricians offices.

As a result, moms who are able to avoid the booby traps that keep them from meeting their own breastfeeding goals often have copious supplies of milk - and no idea what to do with the extra! They may hear about a friend or a neighbour in need, or they may encounter a milksharing network and then their freezer stash is put to good use instead of being tossed down the drain. But most moms with healthy babies have no idea just how sick those babies in the NICU are, and how great the need is in the NICU for donor human milk, or how to sign up to donate at one of Canada's mlk banks.

This lack of awareness has resulted in a critical shortage of donor milk for babies in NICUS. The number of women who start out breastfeeding in Canada is around 90 per cent. In the Calgary milk bank's first year of operation lots of publicity and support caused the bank to exceed its donor goal. A collection depot was opened in Edmonton, and Alberta's hospitals started changing their protocols to use the new supply of donor milk. But now that all of Alberta's level III NICUs are using donor milk, demand is up and the pressure is on for more donors. Alberta is in the middle of a baby boom with about 55,000 babies being born each year and we have the highest prematurity rate in Canada.

The Calgary Foundation has stepped up to the plate with a grant to help Calgary's breastfeeding moms learn about the need, but even though there are about the same number of babies born in Edmonton as Calgary each year, without dollars and with volunteer resources stretched thin, awareness is lower and donations from Edmonton are only a quarter of what they are in Calgary. Same number of babies born, 1/4 the amount of donor milk. See the problem?

What is being done? A team of volunteers, moms, celebrities and breastfeeding advocates from across North America has mobilized to change the situation. Even as milkbanking experts from across Canada and around the world were meeting at the Human Milk Banking Association of North America (HMBANA) conference in Victoria, B.C. April 28-29 to talk about how to increase donor rates, the Best for Babes Foundation was applying its considerable marketing expertise to raise awareness for the need.

In only six short weeks since Best for Babes launched the 1st North American Miracle Milk Mother's Day Stroll volunteers stepped up to organize 70 Stroll sites across North America, including 11 in Canadian cities. There are even 2 Strolls taking place on military bases in the UK. Registration fees and t-shirt sales have already raised $15,000, and more donations of money and milk are expected to continue to pour in as the day of the Stroll approaches.

In recent years the US, like Canada, has seen pediatricians call for preterm babies to have pasteurized donor milk when mother’s own milk is unavailable. But Jennifer Canvasser, who lost her son to NEC last year, says 60% of US NICUs aren't using donor milk. "The call is being ignored," Canvasser says. "It’s a tragedy that more parents, health care providers, medical directors and hospital administrators don’t know about donor milk’s existence, accessibility, safety and life-saving powers for babies in the NICU.”

This Saturday, May 10th, hundreds of Canadians will be donning their black and pink Miracle Milk t-shirts and strolling to raise awareness, money and milk for this very important cause. Canada's Stroll sites will drive donations to Canada's milk bank network as well as to the fund set up by the Best for Babes Foundation to benefit Canvasser's NEC Society, HMBANA, and other educators.

While several hundred people is hardly a blanket of black and pink from coast-to-coast - it is a very important first step. Best for Babes Foundation co-founder Danielle Rigg says, "our goal with this event is to create a North America-wide consumer-driven platform to raise awareness, funds and milk donations to help make human and donor milk the standard of care in NICUs everywhere to help reduce suffering and deaths. Human milk saves lives. We don’t really need more science. What we need are more solutions to help more moms get more Miracle Milk to more premature, sick and fragile babies.”

I'll be there. What about you? Register or donate here, or click through to your local stroll site for more information on how to donate money or milk to your local milk bank. 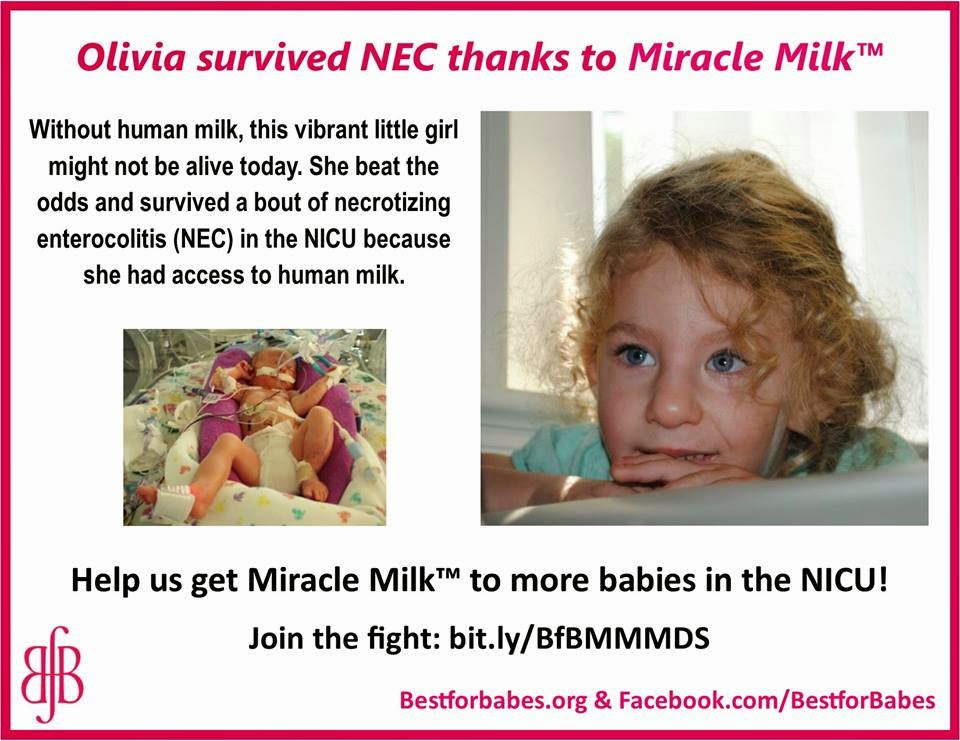 Posted by Jodine Chase at 1:29 PM No comments: Human milk bank opens in New ZealandWednesday, 12 February, 2014 - 09:12Christchurch’s Neonatal Intensive Care Unit (NICU) has officially opened the first hospital-based pasteurised human milk bank in New Zealand.
Dr Maggie Meeks, NICU pediatrician, says this is a significant achievement after years of planning and working closely with stakeholders towards the goal of pasteurising mothers’ excess milk for the benefit of other babies in the NICU. ... link to full story

Posted by Jodine Chase at 9:36 AM No comments: