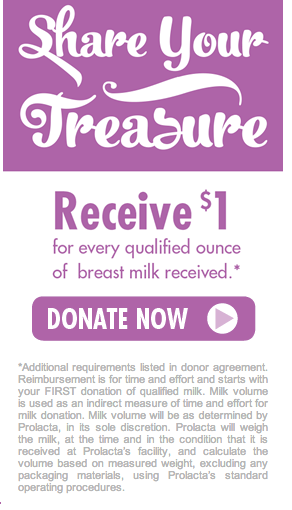 Prolacta is now paying $1 directly to moms for every ounce of breastmilk they provide to the company. Prolacta has long provided a breast pump purchase credit to moms, offering $200-300 cash in exchange for a commitment to provide several hundred ounces of milk. (See: Prolacta/IBMP offer $300 credit instead of breast pump to donors, Dec 2011)

And the company has also been paying $1/ounce to several charities as a way of encouraging moms to provide the milk needed to make their $180/ounce fortifier product. (See: US company Prolacta milks charity partners, donors - Aug 2012.)

Prolacta has been talking about moving to a direct-to-mom cash payment model for a while, and now that competitor Medolac has entered the market, it makes sense for Prolacta to formalize its milk compensation program. (See: Significant corporate developments in the human milk marketplace, Oct 2013)

In a way it's more honest and direct than past compensation models. A clear choice is forming now for moms:

• Get paid $1/ounce from Prolacta and know your milk is eventually going towards the only human-derived human milk fortifier for sick babies in the NICU - 100 per cent human milk saves lives. At a very high price.

• Get paid $1/ounce and upstart Medolac promises it will process your milk and turn it into a shelf-stable, sterile product. "Promises" being the key word; they don't appear to be selling milk yet, so presumably it is in some sort of storage facility as they sort out their processing and delivery systems, and negotiate contracts with hospitals.

• Donate to a HMBANA milk bank belonging to the growing network of non-profit milk banks, which serve just under half the NICUS in Canada and the US. You'll receive no money, but you will know your milk will be pasteurized, retaining many of its critical immune properties, and will be used to help sick babies.

• Give your extra milk to a close friend, relative, or someone in your community, or connect to a recipient in need via peer-to-peer milk sharing networks.

• Sell your extra milk in a private arrangement.

Moms with extra milk are clearly in demand! How will this new Prolacta pay model impact the supply of milk to our non-profit milk banks? Will it reduce the amount of milk shared through peer-to-peer networks?

I agree that it's a seemingly more honest way to buy human milk directly from mothers, than all the middle businesses that were profiting from reselling breast milk.

A little more honest - companies are still profiting and many moms who are receiving compensation are likely to be NEEDING that money as opposed to choosing this model because they believe the end product is the best use of their milk. That opens up a whole ethical can of worms. Just some thoughts on what could go wrong: low-income moms who have access to free infant formula might be driven to sell their own breastmilk while feeding formula to their own infants. Or moms who begin selling breastmilk for money that becomes essential to the household income may be pressured to continue after their own babies wean.

"Monday" If your including HMBANA milk banks in your comment, then you could not be more wrong. Feeding babies in the NICU demands much more scrutiny of bacteria and viruses/diseases due to babies existing fragile state. The majority of milk 'donated' to HMBANA milk banks goes to the NICU's. A lot of research and money goes to ensuring that the milk is safe for these fragile babies. A 2 lb premature baby who is immunosupressed cannot ward off the bugs that an 8 lb full term baby can. HMBANA milk banks sacrifice a lot of personal time and welcome volunteers to help keep the costs of milk down. As well, milk banks draw on the 'community' to pitch in and help the cause. It truly does take a community to run a not-for-profit milk bank. So please be informed before you paint all milk banks the same brush.

Prolacta and Medolac are not "donor milk banks." They extract human milk components from breastmilk and manufacture "human milk products." Not only is their purpose different from donor milk banks but also their financial structure is critically different. In structure and function they are more akin to an infant formula company. Their recent announcement in February of their new product, Ready-to-Feed Human Milk-Based Infant Formula makes it clear that they are part of the Infant Formula Industry. Calling these companies donor milk banks is an error that misleads the public.

You are right, Valerie. I try to be careful with my language around this. It is the companies themselves that have borrowed the terminology of our donor human milk banks.