When doors close in Cambodia, windows open in Myanmar? 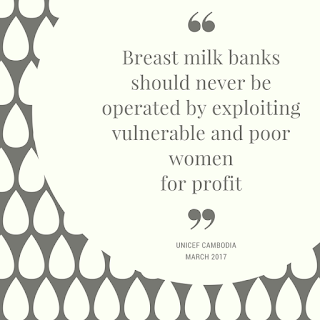 In March 2017, the Cambodia government banned the sale and export of breastmilk after the success of the Utah-based company Ambrosia, (see Human Milk News: Milk mongers sell mix of fear and doubt.)

Ambrosia, co-founded by Utah-based Bronszon Woods, harvested the milk from Cambodia and sold it in the U.S. at a substantial markup. Woods, who first came to Cambodia as a Mormon missionary, paid his Cambodian milk providers to come into a clinic where they expressed milk and received a stipend of about $7-10/day according to media reports. Ambrosia said the payments provided a good and secure living for these families and insisted they only allowed pumping after six months of breastfeeding and restricted it to twice a day so there would still be milk for the family's own infant. 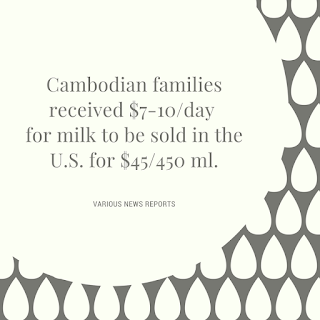 Ambrosia's human milk product was offered for sale in the U.S. at a substantial mark-up -- $45 for a 450 ml (15 oz) -- to everyone from body builders to U.S. families in need. Ambrosia claimed they were providing Cambodian families a safe way to earn a good living, but UNICEF urged the ban after concerns from the Cambodian health ministry that families were selling breastmilk and feeding formula to their own infants. UNICEF Cambodia's spokesperson Iman Morook said via an emailed statement that the practice was exploitive and that excess milk should remain in Cambodia for the many infants in that country who don't have access to adequate nutrition.


"UNICEF believes that breast milk banks should never be operated by exploiting vulnerable and poor women for profit and commercial purposes. Breast milk could be considered as human tissue, the same as blood, and as such its commercialization should be banned.” The clampdown came in the midst of a controversy over a growing surrogacy market in the country, with reports of brokers approaching poor pregnant people with offers of $7-10,000 to buy their babies. One freelance reporter asked Ambrosia if they planned to tap into this surrogacy market, purchasing the milk from women who no longer had a baby to feed it to, and Ambrosia co-founder Ryan Newall told her "yes, we want to do that, the surrogacy market is booming," although he went on to note the government's plans to clamp down would allow his company to offer an alternative income stream where families could keep their children.

In condemning the export of this valuable resource, UNICEF Cambodia called for breast milk banks to provide adequate nutrition for Cambodia's own premature or orphaned infants. In February of 2017, the first milk bank in Southeast Asia to operate under international standards opened in Vietnam. A workshop was held to exchange knowledge about the possibility of opening milk banks in other ASEAN countries like Myanmar, Cambodia, the Philippines and Thailand.

Alive and Thrive, in a project funded by the Bill and Melinda Gates Foundation as well as the governments of Canada and Ireland, has been working on a three-pronged approach to improve breastfeeding rates in Vietnam and has seen remarkable success. The country introduced new laws including adequate maternity leave, launched additional supports for families who are breastfeeding, banned predatory infant formula marketing and replaced it with messaging about the importance of exclusive breastfeeding, and the result was a remarkable turnaround, with exclusive breastfeeding rates up from 10 per cent in 2010 to 58 per cent in 2014. The program is scaling up to other countries in Southeast Asia including Cambodia. Milk banks are an important component of any program to improve the nutritional status of a nation and including them as part of the national policy environment to support breastfeeding is an important step. 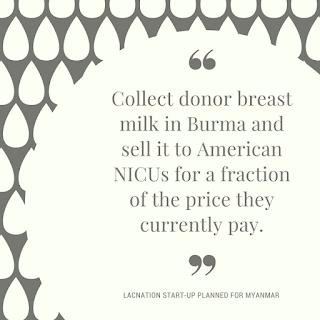 Human Milk News periodically receives tips behind the scenes about new commercial entities entering the human milk trade, and even before Ambrosia's operations in Cambodia were shut down, we heard about several other startups planning to emulate the model, but so far nothing has materialized.* However, one copycat to watch is the startup LacNation, which is quietly trying to convince the Myanmar government and health authorities to let them set up a similar operation. In a listing on the Startup Compete website, LacNation describes its startup plan to to:


"Collect donor breast milk in Burma and sell it to American NICUs for a fraction of the price they currently pay. Use FDA approved processing and HMBANA donor screening standards to ensure donor milk quality is up to par with American standards. Pay our donors in Burma for their milk to improve their lives. Use portion of company profits to provide basic maternal and infant healthcare to donors."

The cost of not breastfeeding in Myanmar is high, and the country moved to improve its breastfeeding rates with a new law adopting the International Code of Marketing of Breast Milk Substitutes in 2014, and has extended maternity leave in the public sector. A report from UNICEF and Alive and Thrive in 2015 explored the economic toll of suboptimal breastfeeding rates, noting  policies and programs to save lives will provide a high return on investment for the country.

Hopefully Myanmar health authorities can learned from the experience of Cambodia and Vietnam and turn away from dubious, commercially exploitative milk bank schemes, and instead towards proven programs to support breastfeeding and improve health and wellbeing.

*Edited to add: I am remiss in not mentioning the tireless efforts of Marion Rice, who keeps tabs on new entrants into this field. She speaks about on the subject of "Biological Integrity, Ethics and Control over Human Milk." You can hear Marion interviewed by Gold Lactation's Fiona Lang Sharpe as part of their milk banking add-on lecture package aired earlier this year.

This independent in-depth investigation by Julie Smith in Truth Dig is also a must-read:
An example of capitalism literally milking the poor -- Truth Dig, April 19, 2017

Posted by Jodine Chase at 5:17 PM No comments: