GDP of human milk production in USA? est. $110B

This great article by The Age's economic editor looks at how we undervalue breast milk by not including it in our our GDP. The article notes how odd it is that when a farmer feeds a child milk from her backyard cow, it counts, but not if the child is breastfed. 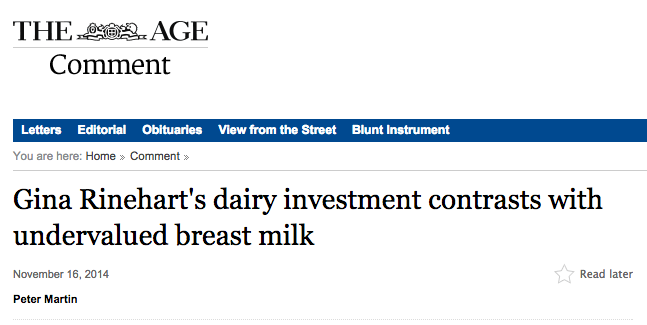 "Gina Rinehart is on to something. The woman who picked the mining boom by betting on iron ore at a time when few realised what was about to happen in China, she is now betting on powdered milk.

So fast is China's market for infant formula growing that it doubled in five years and is expected to double again in three years. It's why foreign companies are falling over themselves to take over Australian milk producers.

And it's why the richest Australian is spending half a billion to build Hope Dairies from scratch. Bloomberg reports it'll take up 5000 hectares of Queensland farmland pumping out an extraordinary 30,000 tonnes of infant formula per year, all of it bound for China, gazumping Australia's present milk powder exports to China of 18,000 tonnes per year.
It would be great if it actually helped Chinese infants. But it won't. Infant formula is one of those rare products the use of which usually hurts rather than helps the user. And unlike others such as alcohol and unhealthy foods the user has no choice but to use it...." link to full article

The GDP info comes from the work of Australian economist Julie Smith. You can read more about her work in *this Journal of Human Lactation article and you can see a synopsis in this slide presentation.

Smith has estimated the value of human milk production to be Aus. $3B annually for Australia, $110B annually for the US, and $1B annually for tiny Norway. She notes Australia and the US's rates are lower than they could be due to less than optimal initiation and duration rates.

*Full access to the Journal of Human Lactation is one of the many benefits of being an International Lactation Consultants Association member. I think ILCA is a fabulous organization and that's why I spend some of my volunteer time on the ILCA Medialert team. My views are my own and do not represent ILCA.

Posted by Jodine Chase at 1:48 PM No comments: