Toronto's pending milk bank sparks controversies over delays leading to baby deaths, and who should get the milk 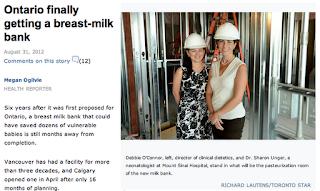 The milk bank is scheduled to open this fall, six years after it was first proposed and a year after the Toronto government committed $1.2M towards it, reports the Toronto Star. The Star doesn't pull any punches: donor human milk could have saved the dozens of babies who died from necrotizing enterocolitis (NEC) while the milk bank was in the planning and research stages. The Star notes a milk bank in Calgary was up and running just 16 months after it was first proposed. The Star's story has triggered an opinion column in one of Canada's national dailies, the National Post, slamming the Ontario health care system for taking so long to establish the facility. Meanwhile, CBC reports, the mother of a healthy term infant in Ottawa who was unable to breastfeed arranged and paid for donor milk from another milk bank. She wants the Toronto milk bank to serve families with healthy children who can't receive their mothers' own milk, as well as the very low birth weight preemies and babies with bowel disorders the bank intends to target. CBC quotes Ottawa neonatologist Brigitte Lemyre who says, essentially, donor milk is a scare resource and the sickest babies should receive priority. CBC reports Lemyre also says there is no evidence donor milk benefits healthy babies.


The baby deaths in the years it took for Toronto's milk bank to get off the ground are a tragedy and the resulting controversy is likely to overshadow the issue of who should receive donor milk once milk banks are re-established across Canada.

The delay in establishing the Toronto milk bank was one of the catalysts for the creation of milksharing communities on Facebook two years ago. Canadian breastfeeding advocate Emma Kwasnica and her network of moms from around the world decided to take matters into their own hands. Mothers were clamouring to donate, and were frustrated at being told there was no demand for their extra milk - instead of pouring it down the drain, they started offering it to families in need in their communities. They turned to the networking solutions of their generation to match families in need with mothers who had extra milk, and the resulting global Facebook milksharing network made news in the fall of 2010.

Some health care professionals, concerned about possible risks of milksharing and realizing increased pressure on milk banks from NICUs was making less milk available to babies in the community, found themselves assuring mothers of healthy infants that infant formula is just fine for their babies. This of course is contrary to the messaging breastfeeding advocates have worked hard for decades to get out to the general public. Breast is not best, it's normal, and formula is not fine, it comes with increased risks for all babies, with of course the sickest being at most risk.

One concern at the time was that the popularity of milksharing might reduce the number of moms who donate to milk banks. That concern appears to be unfounded, but when there is a shortage of donor milk in hospital freezers, or when policy glitches or funding issues keep the sickest preemies from receiving donor milk, emotions naturally run high.

On the eve of WorldMilksharing Week (Sept 24-30) USA Today explores the rising popularity of both milk banks and milksharing. Operator of the long-standing milk bank in San Jose, California, Pauline Sakamoto, says HMBANA milk banks distributed 2.1 million ounces in 2011, up from 1.5 million in 2009. And more milk banks are on the way -  Kansas City, Orlando, Portland, Missoula will all be getting milk banks soon. In Canada – a new milk bank collection depot is set to open in Edmonton, B.C.'s milk bank system is expanding, and efforts are underway to open milk banks in Saskatchewan and New Brunswick. Sakamoto and HM4HB's Kwasnica both note there is no rivalry between milksharing and milk banking, and acknowledge each practice brings different benefits and risks to a community.

As donor human milk is embraced both in the community and by neonatologists and health care authorities, more families will turn to milksharing, and more milk banks will open. In each community questions will arise:

I hope we will be able to move away from kneejerk responses born of concern over safety and scarcity. We need to acknowledge and applaud the success that has come from decades of hard work on the part of breastfeeding advocates who have clearly convinced families and health care professionals of the value of donor human milk. We need to explore the issues that have arisen and develop thoughtful and sound, evidence-based policies to support the use of all donor human milk.
It's time for stakeholders in North America - families who need donor milk, moms with milk to donate, advocates who support, protect and promote breastfeeding, health care providers, hospital administrators, policy makers, and anyone else with the authority and capacity to restore and improve the system - to come together. It's time we had appropriate policies and processes in place for funding and support for families who wish to use donor human milk when mother's own milk isn't available. Babies are dying in NICUs - and mothers are still pouring excess milk down the drain.

A Story of Peace and Healing - Normal, like breathing, Diana Cassar-Uhl

"I wish I'd Known About Milksharing When..." - Complete Wellness Concept, Dinnae Galloway


News coverage, Toronto Milk Bank
Ontario finally getting a breast-milk bank
Toronto Star, August 31, 2012
Six years after it was first proposed for Ontario, a breast milk bank that could have saved dozens of vulnerable babies is still months away from completion. Vancouver has had a facility for more than three decades, and Calgary opened one in April after only 16 months of planning....more
--------
Mother wants donated breast milk from Toronto bank - Provincial milk bank to provide donated breast milk to ill newborn babies at Ontario hospitals
CBC News, Sept 5, 2012
Some parents want a new provincial breast milk bank to do more than provide donated breast milk to unhealthy babies, as it has proposed. The brand new provincial milk bank is set to open in January at Toronto's Mount Sinai Hospital in partnership with the Hospital for Sick Children and Sunnybrook Health Sciences Centre. ... more
---------
FULL COMMENT
Matt Gurney: Ontario’s healthcare system dithers while
babies die

There was an absolutely astonishing article over the weekend on the development of a new Ontario breast milk bank. The facility, to operate out of a Toronto hospital,
will house properly screened donations of human breast milk for babieswhose own mothers are, for whatever reason, unable to nurse their children. A facility such as this will keep babies alive and save taxpayers money.
Yet it has been stuck in limbo for no less than six years....more
---------

Use of mother's milk banks, milk-sharing skyrockets
By Brian Shane, USA TODAY, Sept 2, 2012
This time last year, Mother's Milk Bank in San Jose may have been able to send a month's worth of donated breast milk to hospitals in Alaska or Hawaii in a single shipment. Now many of those same hospitals can only get their milk by the week.... more

Posted by Jodine Chase at 9:26 AM No comments:

Woman donates to BC's milk bank and to local family

This is the story of Olive Chan, who wasn't able to breastfeed but continued to pump to provide her baby with milk. She wound up with more than she could use and donated from her overflowing freezer to a local family, and to the BC milk bank.

Posted by Jodine Chase at 7:56 AM No comments:

Earlier this year Canadians for Health Research featured Dr. Shoo Lee as their researcher of the month. Dr. Lee is the head paediatrician behind the research into donor human milk use in the NICU in Toronto. Take a look at the full article to learn more about Dr. Lee's efforts - he's the founder of the Canadian Neonatal Network which unites neonatal researchers across Canada, and he's been instrumental in encouraging NICUs to adopt evidence-based practices in neonatal care, which is a factor in the resurgence of interest in the use of donor human milk in the NICU. Dr. Lee was at UBC and the University of Alberta before moving to Toronto. Of note is Dr. Lee's exploration into why Japan has succeeded in reducing the rate of necrotizing enterocolitis in premature babies - in Japan only human milk is allowed in the neonatal nursery. Japan's NEC rate is 0.5%.

Dr. Shoo Lee | Canadians for Health Research | Les Canadiens pour la recherche medicale
Scientific Director, CIHR Institute of Human Development, Child and Youth Health Professor of Pediatrics, Obstetrics and Gynecology - University of Toronto
Researcher of the month:
Leading the Vanguard in Neonatal CareOver the last 20 years, Canada has slipped from the top 5 in lowest infant mortality rate to rank 40th in the world.
“That’s unacceptable to me,” says Dr. Shoo Lee, a neonatologist and health economist, recently appointed as Scientific Director of the Canadian Institutes for Health Research (CIHR)’s Institute of Human Development, Child and Youth Health. “Canada is a rich country. Why are so many other poorer countries ahead of us? Not only that, in native communities, the infant mortality rate is 3 times higher than in the general population.”
Infant mortality isn’t the only problem that Dr. Lee wants to tackle in his new job. “We’ve had a 30% rise in prematurity rates in this country over the last 20 years. We need to pay attention and develop ways to deal with this problem.”
...
Breast vs cow’s milk in the NICUAbout 7% of very-low-birth-weight infants weighing less than 1500 grams at birth worldwide suffer from necrotizing enterocolitis (NEC). This intestinal infection is one of the single biggest killers of premature babies. In Canada, neonatal death rates from NEC have risen as high as 33%. The only country that has succeeded in reducing NEC is Japan, which currently has an incidence of 0.5%.
“Japan does not do evidence-based research, so we sent a delegation there to watch,” explains Dr Lee. “One of the things that impressed us was that they do not allow cow’s milk in the neonatal nursery. Only human milk is allowed. If the baby’s mother cannot produce milk, they use donor milk from another mother.”
By 7 to 10 days, every infant has been converted from intravenous fluid or parenteral feedings to full feedings of human milk. Conversion rates are typically slower in Canada.
Projects were started in Vancouver and at Sunnybrook Health Sciences Centre in Toronto to feed only human milk to premature babies, unless mothers objected. Within 2 years, the incidence of NEC had dropped from 10% to 2% in Vancouver and from 8% to 1% at Sunnybrook.
“To me, this is good enough proof,” says Dr. Lee. “We are working to build human milk banks in the rest of the country and to supply all the babies who need it.”...more

Posted by Jodine Chase at 7:07 AM No comments: