This guest post by Marsha Walker, RN, IBCLC, Executive Director, National Alliance for Breastfeeding Advocacy, will also be on the NABA website and in the US Lactation Consultant Association monthly newsletter.


Nestlé has bought a seat at the policy-making table of the World Health Organization (WHO).

WHO has accepted funding from Nestlé for WHO's obesity reduction initiative. A Reuters news article  reported that the Pan American Health Organization (PAHO), WHO's regional office for the Americas, accepted $150,000 from Nestlé to help reduce the very problem to which Nestlé products contribute. 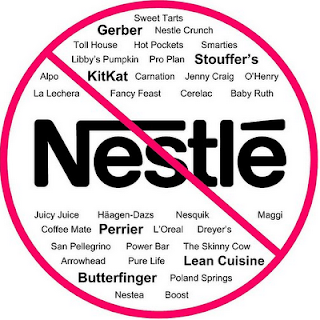 Cash-strapped WHO has started to rely on corporate offenders such as Nestlé and Coca-Cola to fund its health initiatives, placing itself in a massive conflict of interest, as policy is shaped by companies who stand to gain the most from the ill health their products promote. Disease promoting corporations have found that it is much more profitable to invest in a seat at the policy-making table to avoid sanctions, monitoring, and regulation than it is to cease producing the products that contribute to chronic diseases and conditions such as obesity. The wolf in sheep's clothing comes bearing money and is rewarded for its poor corporate behavior by aligning itself with the good name of respected health agencies.


Breastfeeding advocates who are staunch supporters of the International Code of Marketing of Breastmilk Substitutes (the Code) are aghast that WHO is violating its own Code. By abdicating its responsibility to infants and mothers, WHO is modeling the very behavior the Code was created to prevent.

This blow to the Code may seem overwhelming to those who work so hard to support breastfeeding mothers. Even though we do not have the unlimited funding of large corporations we have our voices that can be raised together so that WHO might hear us. Consider joining Friends of the WHO Code Facebook group. We can harness social media to let WHO know how we feel. Post to WHO's Facebook page, tweet @WHO to let WHO know how damaging this conflict of interest is to the Code.  (Update: there is now a petition.)

Of course, be ready for Nestlé's response. Nestlé has what they call their Digital Acceleration Team that monitors hot spots in the social media and jumps in quickly to apply damage control when Nestlé or its products are unfavorably mentioned. Let's use what we have at our fingertips to right an egregious wrong. 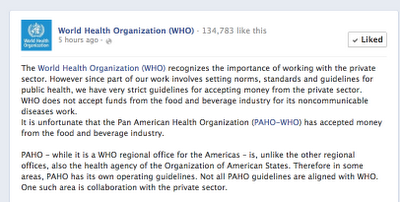 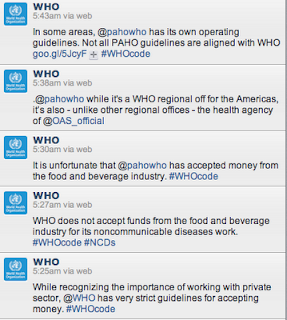 What's up with that background image?

I get asked sometimes about the background image I use for this blog. It's a late Renaissance painting by Jacopo Tintoretto and it hangs in the National Gallery in London.


I love it because:

• it portrays the Greek myth of the infant Heracles being brought by his half-sister Athena to her mother Hera, who nursed him out of pity. His suck caused her milk to spray across the heavens, forming the Milky Way. The divine milk gave Heracles his super powers. I love that story!

• it portrays a breast with actual milk coming right out of it - something every one of us should see, both closeup at our mother's breast, but also as children, as teenagers, as adults, as health care professionals, as educators. Because, to paraphrase Emma Kwasnica, we need to SEE milk coming out of nipples if we want to normalize breastfeeding:


Quite simply, this is about normalizing breastfeeding. The more we hide it away, classify it as obscene, shame mothers into covering up while feeding, and encourage women to retire to "private" rooms in order to breastfeed the baby, the less we see of it in public, and the less and less people are comfortable with the very idea of nursing in public. This is the sad reality, in this pathologically hyper-sexualized (yet sexually repressed...) North American culture of ours. The solution, however, seems quite simple to me; breastfeeding (and/or images of breastfeeding) need to be seen every day, and I am convinced that SEEING more breastfeeding, wherever possible, is what will change our breastfeeding culture. Re-normalize it. Everywhere in North America (in all provinces in Canada, and in every state in the USA but two) women have the right to breastfeed in public, wherever they have the legal right to be. So women should do it. And they should feel completely free to do it. Lots of it. As much as possible. From Informed Parenting, which hosts Emma's entire essay, "Why seeing breastfeeding is important: my personal challenge to you"

of it up as my Facebook profile. Bam! Instant 30 day ban.

• it illustrates what my blog is about. This is not a breastfeeding blog. It is a blog about human milk. Which of course wouldn't happen without breastfeeding. But this blog is about what happens when human milk leaves a woman's body and doesn't go directly into her own baby's mouth.
Posted by Jodine Chase at 2:14 PM No comments: