The European Milk Banking Association has issued a position on milksharing as of December, 2011, after its annual general meeting in Milan in November, 2011.  In essence, while they "understand and applaud the growing desire by parents and carers to provide breast milk instead of artificial (formula) milk … and fully support all efforts to help mothers to breastfeed their own babies..." they are convinced the only way to share breastmilk safely in Europe is through the network of 165 milk banks under the EMBA umbrella. They warn: 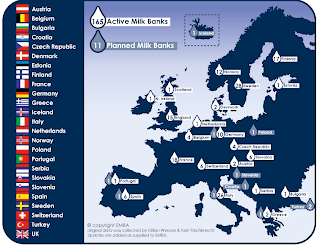 "The worldwide increasing support for and credibility of human milk banking and breastmilk sharing will be undermined in the event of adverse consequences derived from uncontrolled and informal utilisation of breastmilk and as a reaction the increased use of artificial milk could result. That is why EMBA strongly recommends that donor breastmilk should be obtained from human milk banks which follow quality guidelines for donor screening, breastmilk handling and processing."

This fear of great harm to milk banking from an adverse consequence due to milksharing has long puzzled me. I have heard health professionals say human milk banking could be irretrievably harmed if donor human milk were found to be the cause of a single baby's death. "All it will take is for one baby to die..."

We don't see the formula firms running around saying, "just one death and the whole industry will collapse!"

Yet here in Canada the lack of donor human milk in NICUs over the last 25 years has resulted in an increased number of cases of necrotizing enterocolitis (NEC) in premature babies - and a good number of those babies have died. INFACT Canada says 50 babies die each year in Canada from NEC. A study published in the US Journal of Pediatrics last year found the lives of 900 babies a year could be saved by breastfeeding.  Just last month the death of a newborn baby in Missouri was linked to powdered infant formula, along with several other cases of illness. After a baby died in Belgium in 2002 from bacteria in powdered infant formula, a number of other reports of contamination surfaced. And of course in the developing world there are thousands of deaths from infant formula.

The infant formula industry is secure in the knowledge that even with adverse effects, babies need to be fed and in the absence of human milk from a mother or from a donor, infant formula is the accepted option.

If a publicized case of adverse effects from milksharing causes even more families to turn to infant formula,  it will be a clear failure of our governing bodies, our health protection agencies, our medical professionals, and of our news media to adequately explain to the public the relative risk of feeding donated human milk vs the risk of feeding infant formula. Evidence shows human milk from a healthy donor is safer for human babies than infant formula.

Milksharing proponents believe parents can be trusted to make informed choices to ensure the health of their infants. Milk banks and government officials take a more classic public health approach - that individuals may not make the best decisions despite their best intentions and need guidance from authorities.

So far the guidance has been to say, "don't do it."

In this, public health authorities would be acting with the same level of care and diligence they apply to guidance for families using artificial human milk substitutes - infant formulas. Officials provide guidance on how to safely prepare infant formula and issue warnings about the risks of unsafe practices (although those warnings are usually quite tempered - you rarely hear authorities explaining infant formula preparation techniques and ending with, "do it this way or your baby could die...") We know some families will not follow those instructions, through ignorance or desperation they will feed improperly prepared unsterile products to immune-compromised infants. (All infants are born immune-compromised - the human immune system doesn't fully mature until much later in childhood.)

Is the solution to tell families "don't use infant formula, you might get it wrong, you might inadvertently harm your baby, and that will be a horrible outcome – that could put the entire infant formula industry in jeopardy...?"

Of course not. The solution is to educate, support and inform parents and families about the relative risks of various feeding choices using the best evidence and knowledge available today. It is up to to health authorities to tell parents that even if a baby dies, and the death is linked to milksharing, the use of human milk from a healthy donor is still safer than infant formula.


This article is by Jodine Chase, who is a public relations consultant and news analyst. Jodine is a long-time breastfeeding advocate who, as a volunteer, has worked for years to reestablish human milk banks in Canada. She volunteered some of her time earlier this year to Human Milk 4 Human Babies.

Great blog! I couldn't agree with you more on the issue of milksharing. Breastfeeding proponents should be working overtime to improve any perceived risks in sharing instead of condemning it.