Natural disasters - are we doing enough to protect infants?

After a year of flooding and wildfires here in Alberta and around the world, a new report released today calls for emergency planners to do a better job of ensuring infant safety in emergencies in the developed world.

The report comes on the heels of the devastating wildfires and flooding in Australia, earthquakes and tsunami in New Zealand and Japan and the US's recent problems coping with the aftermath of events like Hurricane Katrina.

The authors are emergency infant feeding experts Karleen Gribble and Nina Berry, both from Australia. Gribble provides advice to organizations like UNICEF and the Emergency Nutrition Network on infant feeding in emergencies, and Berry has coordinating breastfeeding support and artificial feeding programs for Save the Children UK.

Infant feeding experts have been warning for at least a decade, and certainly since Hurricane Katrina, that emergency planners in the developed world are not adequately prepared to protect infants in the face of disaster. Gribble and Berry have taken what they have  learned about infant feeding during emergencies in the developing world, and have created recommendations relevant for emergency planners in developed countries:

The report notes most emergency preparedness guidelines lack specific advice for caring for and feeding infants during an emergency. It outlines in detail the emergency kits caregivers should have on hand when essential services such as water, power, and gas are unavailable - right down to the surprising amount of water needed to support a powdered-formula-fed infant - 24 litres of water per day to ensure safe preparation and cleaning. (Yes, 24 litres! After the flooding and fires in Australia an evacuation centre sought advice on how to clean baby bottles and nipples. They had little drinking water, not enough to clean bottles. Suggestions included cleaning bottles with sand or reusing cloths kept in the sun to try to kill bacteria.)

There seems to be no clear understanding that it is the formula-fed baby and not the breastfeed baby who is in an insecure food situation. Emergency workers often don't know how important it is to exclusively breastfeed and may assume that a woman's milk supply is diminished during an emergency situation.  The reports cite instances right here in North America. During the 2007 wildfires in San Diego evacuation authorities told women to stop breastfeeding and start feeding infant formula.

Babies born on the eve of disaster are routinely discharged from hospital on formula. Even as Hurricane Katrina approached, New Orleans area hospitals were discharging formula feeding mothers without adequate preparation or supplies or an explanation of how important it was to breastfeed at least through the duration of the emergency. One newborn died after being stranded on a roof for five days with his mother who did not have formula. He was alive when rescued but later died in hospital and a medical assessment of the mother revealed she had breasts engorged with milk. 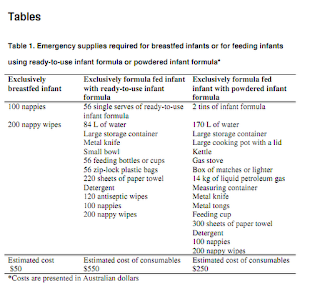 The cost of pulling together an emergency kit for a week's worth of supplies for an infant fed formula is substantial - estimated $500 in this report, which says the cost for a breastfed baby is one tenth that amount. The report also recommends advice to mothers living in areas prone to seasonal emergencies such as flooding or wildfire to continue breastfeed through the duration of the emergency season. (This isn't new advice, I remember reading a parenting guide from 100 years ago that gave weaning advice not on the basis of how old the child was, but when its birth fell on the calendar year - mothers who were considering weaning as fall approached were advised to hold off until spring so babies could continue to receive immunity from the mother during cold and flu season.)

How do we stack up here in Canada? Badly. In Public Safety Canada's official emergency guide there is simply a reference to infant formula as something one might think to have on hand.

Emergency planners in Canada can look to this report for good, practical recommendations:

- simple public messaging about infant feeding prior to and during emergencies: such as “mothers considering ceasing breastfeeding should consider waiting until after the [bushfire/wildfire/cyclone/hurricane/typhoon/flooding/snowstorm] season.”

A quick look at the Alberta emergency plan reveals more information for the care and feeding of livestock than infants.

Disasters happen and we in Canada are not immune.

It wouldn't take much for Canada to improve planning for appropriate infant nutrition during emergencies. Health Canada is currently reviewing infant feeding guidelines and should include as section on infant feeding in emergencies. Provincial and municipal emergency preparedness agencies should look to their own policies, procedures, and public messaging to ensure they are aligned. Our emergency plans should be updated and public advice on preparing emergency kits should include detailed supplies needed for safe infant feeding.

After the tornado in Goderich I called the 211 number to give my contact info for breastfeeding support as an LLL leader. The person on the phone actually said "I'm not quite sure how this is applicable". That was the service that was designated to connect offers with needs. Alarming.

It is alarming. A lot of work needs to be done in this area. The Australian Breastfeeding Association has pulled together some infant feeding in emergencies resources and during their last series of disasters they issued news releases alerting media to the presence of 24/7 counsellors available to take calls from mothers with breastfeeding concerns.

I think this is key - LLL in Canada should be able to take information from La Leche League International and revise it to make it specific to local emergencies if a news advisory is prepared in advance it should be very simple to issue it quickly when disaster strikes. http://www.llli.org/emergency.html

And it is important for health care providers and government agencies to become more savvy about this - during the Christchurch earthquakes the infant formula makers were quick to launch a formula donation campaign targeted directly at workers in the field. http://infantnutritioncouncil.com/2011/02/donations-of-infant-formula-for-christchurch-earthquake-victims/